October Birthday – Learn About Your Birthstone

October is one of the special months which has two birthstones: Opal and Tourmaline. The newer birthstone for October is Tourmaline (added in 1952). It is unusual because it is one of the few gems in the world that can be found in almost every color. The pink tourmalines can have clarity similar to diamonds in its transparency. The more well-known birthstone for October is the Opal. Opals come in many colors however the classic style often has a white milky background. 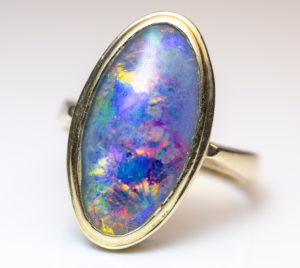 Since ancient times, Opals have been known as the queen of gems because they encompass the colors of many other gems. Each Opal is as unique as our own fingerprints. Depending on your preference, you may prefer the calming flashes of blues and greens or love the bright reds and yellows. These colors play and shift as you turn and move the Opal gemstone.

Rare and stunning black Opals are found at Australia’s Lightning Ridge. The ideal Opal is one that displays broad patterns covering the surface in all colors of the rainbow. Be sure to choose the Opal that showcases your color preference and pattern.

Opals are actually mineraloids and not minerals, which means they don’t have well-formed crystals. Because of this you must be careful not to scratch your Opal and always clean it with only warm soapy water and a very soft brush. Tourmaline and Pearls demand the same careful cleaning treatment.

Opals are also sensitive to extreme heat or sudden temperature fluctuations so be careful when wearing in seasons where the weather may stress your opal.

In addition to being October’s birthstone, they are also given for one’s 14th wedding anniversary! 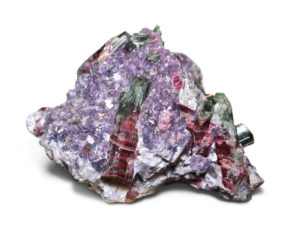 While pink Tourmaline is widely associated with October’s birthstone, it also comes in all the beautiful rainbow colors, Tourmaline is a favorite gemstone for many people. Tourmaline definitely lives up to its name, which means “a stone with mixed colors.” With a variety of colors, Tourmaline can easily enhance any jewelry collection. It comes in bubblegum pink, peach, cranberry red, hot magenta, orange, canary yellow, mint, grass and forest green, ocean blue, violet, and even more colors. Tourmaline is sometimes mistaken for other gems such as rubies and emeralds because the colors are so rich and beautiful.

Tourmaline is also known for its ability to display several colors in one gemstone. These bi-color or tri-color gems are formed in many combinations and are highly prized.

Watermelon Tourmaline is one of the multi-color varieties which features green, white, and pink color bands. To resemble its namesake, the gemstone is cut into thin slices with a pink center, white ring and green edge.

While slightly harder than Opals, Tourmalines also require gentle care with warm soapy water and a soft brush. They should never be put in an ultrasonic cleaner with chemicals that might damage the stone.

If you want to read about other birthstones, click on the month here: January, March, April, May, June, July, August, September, October, November and December.

Stop by one of Albert’s four locations to find the perfect birthstone that you are looking for! Albert’s has been family owned and operated since 1927. No matter what part of the Tri-Cities you’re in, we have a location to serve you. With four Albert’s Pawn locations (Downtown Johnson City, North Johnson City, Bristol and Kingsport), getting top dollar for your items for pawn loans and finding that item you’ve been looking for at an unbeatable price has never been easier. Stop by and see why Albert’s Pawn is the premier pawnshop in the area.