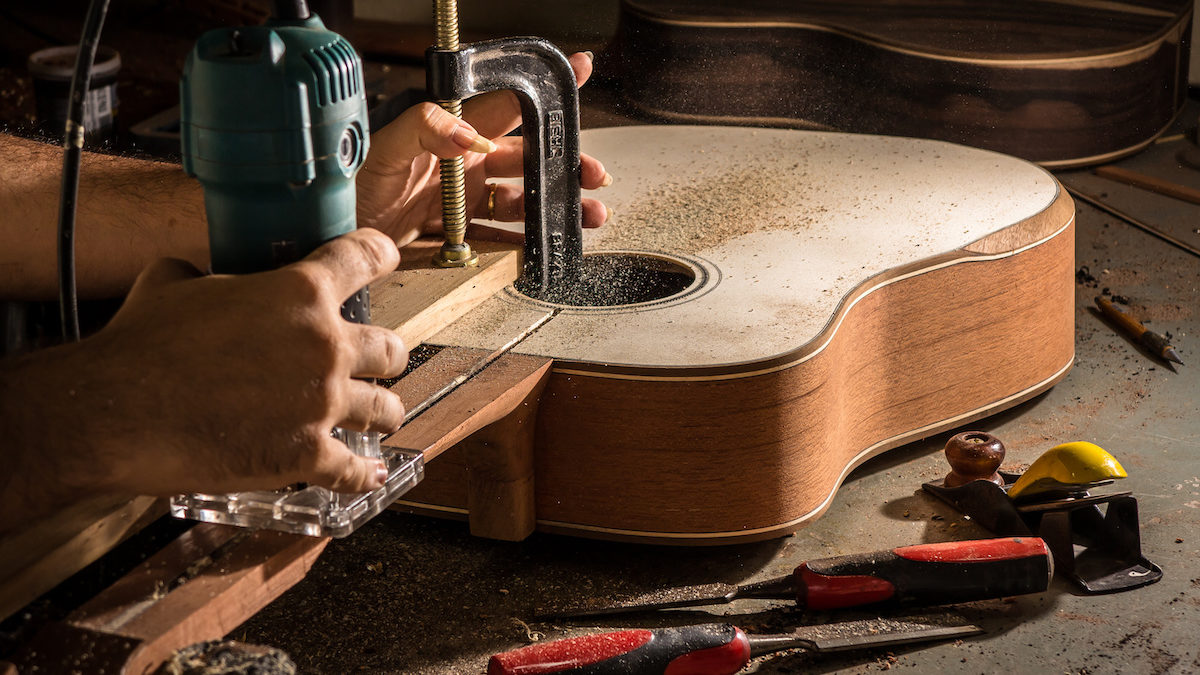 Let’s look at an important part of the guitar buying process…where was it made?

Where a guitar is built has a lot to do with its value. The woods are pretty much the same, made from mahogany, maple, rosewood, cedar, ash, etc. Most of these woods originate in North America. So if the wood is pretty much the same, then a guitar made in Indonesia should be as good as one built here in the good ol’ USA, right? Nope. There exists a hierarchical range of guitar building countries. We’ll be ranking the countries of manufacture and little synopsis of why one is better than the other. (This listing doesn’t include the hand-built guitars of small luthiers and classical guitar builders of Spain, who build the finest classical guitars in the world).

Fender, Gibson and Martin are household names and are among the most copied guitars on earth. Perfected over the past century or more, these manufacturers are known for using better wood and electronics than other countries thus holding their resale value better.

Second place goes to the Japanese guitar builders. Introduced to American made guitars after WW II, the Japanese guitar market went from mass producing for the catalog set to making original guitars with attention to detail rivaling some US guitars. Fastidious build quality is the hallmark of today’s Japanese guitars.

After the Japanese market took off, Japanese factories moved production offshore with their workers to produce more affordable guitars.

The big American manufacturers opened factories to produce good quality guitars with lower prices. They made copies of the guitars that made them famous in America.

Once looked upon as a place where cheap guitars thrived, better factories, tooling, and expertise from the big manufacturers have led to a boom of quality guitars being produced.

The Indonesia market is very reminiscent of the early Japanese and Korean guitars. Right now, very hit or miss build quality, but with the larger guitar manufacturers looking for the next inexpensive labor force, that could change soon.

These are of course guidelines but not written in stone. The most important thing about choosing your guitar is how it feels and sounds to you. At Albert’s we are not locked to the guitar propaganda that afflicts some. As Albert’s Bristol resident guitar expert Mo explains in this anecdote, value isn’t the only thing to consider about purchasing a guitar.

“I have told and retold this story many times and it is by my recollection the truth. At a guitar show, I was handed a guitar.  Not just any guitar, but a 1959 Gibson Les Paul that once belonged to Fleetwood Mac’s Peter Green and Thin Lizzy guitarist Gary Moore. A holy grail as it were. Price tag….a cool million dollars! As I felt the guitar, one thing became instantly apparent….it was a dog. It played terribly, the neck needed to be reset, it was just horrible.

“Of course, given the history and rarity the price was not unexpected. What was unexpected was how unplayable and just terrible it was. I have played and held guitars that were wonderful guitars made in China for $100 that were amazing. Both these extremes provide the yin and yang to the Albert’s Loan guitar motto: a guitar doesn’t know where it was made, it’s either good or bad!”

Stop by one of Albert’s four locations in the tri-cities area to find the perfect guitar at a great price! Here are nine things to know about Albert’s Pawn in Tennessee.

Albert’s has been family owned and operated since 1927. No matter what part of the Tri-Cities you’re in, we have a location to serve you. With four Albert’s Pawn locations (Downtown Johnson City, North Johnson City, Bristol, and Kingsport), getting top dollar for your items for pawn loans and finding that item you’ve been looking for at an unbeatable price has never been easier. Stop by and see why Albert’s Pawn is the premier pawnshop in the area.